Choosing Books for the E-Reader Project 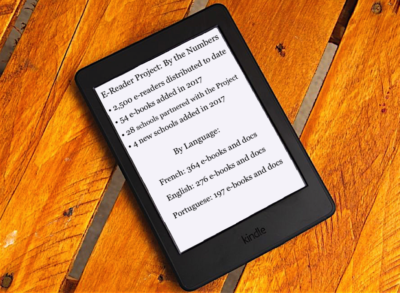 I am often asked the question, “How do you decide which books to put on the e-readers?” It’s a good question, and one that has more than one answer.

We began the E-Reader Project in 2013 at Gbarnga School of Theology in Liberia, West Africa. We compiled that first list by asking the faculty at the school to give us their subject areas and titles of textbooks they were currently using. We researched those titles to find which ones might be in digital format for purchase at Amazon.com or through another ebook outlet. For each subsequent school we brought the Project to, we asked for these lists. If a particular text was not available, we tried to find a similar textbook, favoring books that were based on Wesleyan theology. We also passed the list by academics in the US, as well as editors at the United Methodist Publishing House—a strong partner in the E-Reader Project, providing many core Wesleyan texts. Each school has the opportunity to substitute or add particular books to their school’s e-readers.

Our commitment to the E-Reader Project has been to add new books to the existing library each year—to all three languages offered: French, Portuguese, and English. In 2017, we’ve been able to offer a total of 54 new books: 5 Portuguese (with 6 more pending), 10 French, and 39 English. Twenty of those English titles are being added to all language versions of the e-readers. If I were to give a one-word answer to how we procure these titles, it would have to be relationships.

For instance, about a year ago I received an email message from Dr. Angus Crichton, Worldwide Manager for The Society for Promoting Christian Knowledge (SPCK) in London. He had met United Methodist educator and theologian David Field at a conference, and David had told him about the E-Reader Project. He reached out to me to see if we would be interested in carrying their International Study Guides (ISGs) on the e-readers. These Guides have been written by people from the Global South and for the people who live in these areas. They offered us gems such as African Theology on the Way, A Guide to Doing Theology, Understanding and Using the Bible, and several commentaries, for very little remuneration. This has allowed us to put these Guides on all language editions of the e-readers.

A top priority for choosing new books is African authorship. On every e-reader, we include the 11 titles in the Africa Ministry Series that we (DRI) have published in French, Portuguese, and English. Writers for the series include Bishop Eben Nhiwatiwa, Rev. Dr. John Kurewa, Rev. Dr. Gift Machinga, Rev. Sophirina Sign, Rev. Nday Bondo, and other scholars.

Liberian author and scholar Rev. Dr. Jefferson Labala through his organization Partners for Leadership Resources for Churches in Africa (PLRCA) has provided invaluable and practical e-books including such titles as Through African Eyes, Church Administration Simplified, Church Finance, Lay Leadership Development, and Primer for Advanced Pastors, Labala’s books have laid a strong and contextual foundation for spiritual leaders being trained in theological schools across Africa’s continent.

As our staff and trainers travel to the Project schools, we invite faculty to contribute their unpublished books to the Project, and in that way the Project is helping to share the good work of academics across the continent. We also find local publishers, such as Acton Publishers in Nairobi, who want to share their resources at reduced prices to theological schools. We now carry 8 of Acton’s excellent titles. 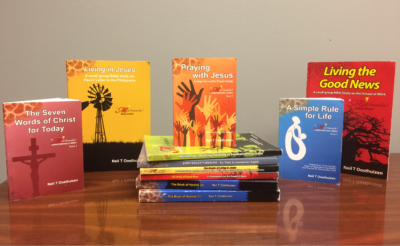 The Project licensed the Malihambe! Commentary and Book Series from Heleen Oosthuizen, the widow of the late Rev. Dr. Neil Oosthuizen of Johannesburg, South Africa. Neil had the vision to resource the many Methodist pastors in South Africa who did speak English, hoping that each book would come out simultaneously in five local languages and was publishing these books through Africa Upper Room Ministries (AURM). Though his mission was cut short by his untimely death, he did finish at least eight books that have been contributed to the Project.

The publishing office at Higher Education and Ministry, Discipleship Ministries’ partner on the E-Reader Project, has donated every title that has come off the press this year, including Introduction to Theology for Ministry by Elaine A. Robinson, Bid Our Jarring Conflicts Cease by David N. Field, A Wesleyan Theology of the Eucharist edited by Jason E. Vickers, and several other important texts.

In August of this year, we invited Vice President of Oasis International, Jeremy Johnson, to our offices to talk about the newly released Africa Study Bible. From that meeting, we negotiated with Oasis to carry the Bible on our new e-readers. They plan to publish this Bible in French by 2019.

United Methodist Women contacted us to donate Women Called to Ministry, leader and student guides, in English, French, and Portuguese. We were especially excited to have resources specifically for women to share with the theological schools.

The United Methodist Church is a connected church—locally and globally. These relationships have led to publishing connections around the world, and we hope that continues!

The E-Readers for Theological Education initiative is a partnership with Higher Education and Ministry and Discipleship Ministries and is committed to providing e-libraries on e-readers with important theological texts to the libraries of United Methodist-related and sponsored theological schools in Africa and the Philippines. Learn more about the E-Reader project and donate today ª