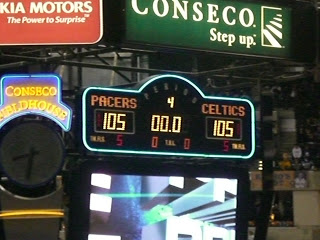 Most of us have watched sports events in which there was a bonus period of play at the end of regulation because the score was still tied. This extra time to decide the outcome of the event has several different names it goes by, most of them nice, like extra innings, overtime, bonus period, and sudden death…well that last name for extra time may not be so nice one to have after all at least not for those on the losing side.

When I played and coached AAU (Amateur Athletic Union) Basketball, there were quite a few of these games I participated in which went into an extra period to decide, and one of the games went into 4 overtimes, before we finally lost, on a shot at the game’s final buzzer which was counted even though it should not have been allowed because the shooter had stepped out of bounds before launching it. I actually think the referees were so tired and winded that they decided to count it because they had very little energy left.

From my game experiences in sport I learned that the bonus period could be an enemy or a friend, could be a blessing or it could be a curse, and could be a gift or a theft. What determined which side of the coin extra time became? A number of factors and really just one; the difference was always the outcome. If the game was close and your team was behind most of the game, but at the end of the game you had tied the score, overtime was a blessing because it time to catch up, to get ahead, and win. If your team had not had a great game plan but was lucky enough to find itself in extra innings, it gave a rare opportunity to change your strategy for the bonus time. If your team had not had many resources (because of injuries) but found itself in overtime then you still had a good shot to win because everyone was tired. Overtime was often surprising, always unpredictable, and often it nullified what had transpired the whole rest of the game.

Retirement is like an extra inning, a bonus period, or overtime. It can be a chance to catch up and still have a winning life, even if the rest of life has been a struggle and full of pain and suffering. The best players are those who can put the whole rest of the game behind them and concentrate upon this phase of the game, realizing different skills, strategy, knowledge maybe required in overtime than the whole rest of the game. The best coaches also shine in overtime and are those who anticipate overtime and therefore are adept at resource management and adaptive to the moment.

My alma mater Duke had this basketball player Fred Lynn who was before my time but was legendary. He did not play very often, never started, but he was famous for his overtime work against arch rival Carolina. His coach Vic Bubbas, inserted him during Overtime on 3 occasions and each time he was phenomenal in overtime but just ordinary in other appearances. His coach asked why he continue to go to him in those situations, had responded that it was a matter of knowing what the moment required and it required someone who could remain calm and confident, focused but not rigid, all qualities this player possessed.

Good retirements can last for several periods after the regular time of life. It requires that a retiree’ let go of their former life and concentrate upon their current life and getting the best and most outcome now. This often requires new knowledge, different skills, and a definitive strategy which can be adapted to meet the moment. Great retirements require preparation just as winning teams practice and prepare for games. It is my hope that through the office I serve as Director to provide the church with pre-retirement resources so planning and strategy can take place. I also hope to help those folks, who are now older adults become the Freddy Lynn’s of retirement: people who do their best work spiritually during bonus time.

One of my favorite musical artists is Jimmy Buffet and one of my favorite songs is entitled, “Last Mango in Paris.” It is about a man who served as a mentor to Jimmy and was constantly adapting and re-adapting his life. In other words he was good at reinventing himself. The last installment was as mayor of Key West, Fl. The lines to the song go something like this

“I went down to Captain Tony's to get out of the heat
When I heard a voice call out to me, "Son, come have a seat"
I had to search my memory as I looked into those eyes
Our lives change like the weather but a legend never dies

He said, "I ate the last mango in Paris
Took the last plane out of Saigon
Took the first bass boat to China
And Jimmy, there's still so much to be done.”

Retirement can be bonus time but it can also be the best time of a person’s life. Retirement should be the time for people to shine, to celebrate life and prepare for what comes next. We should all become the Freddy Lynns of retirement, so that our retirements become legendary.