Discipleship Ministries | Being Old and Poor

Home Blog Being Old and Poor

Being Old and Poor 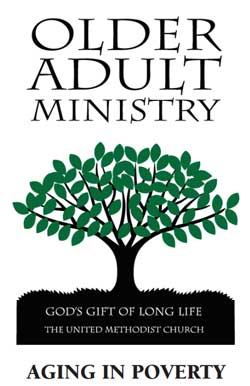 Several years ago I was reminded of the story when history repeated itself, with a twist. Instead of living in NC and reading about a story in PA, I was living in PA and reading about a story in NC. This story concerned an older adult who attempted to get caught robbing a bank so he could be provided with medical care for a number of conditions while incarcerated, since he was unemployed and had no medical insurance.

Indeed, it is often Medical Care and expenses which are responsible for Older Adult Poverty. Living a long life just increases the odds of a catastrophic medical crisis, loss of savings or bankruptcy, and chronic conditions going untreated resulting in a life of pain. The effects of Older Adult poverty are not simply financial or medical, but also spiritual. Obviously in these cases, persons committing violent acts (they are violent whenever it is based upon threat) they would not normally do.

In discussing poverty once upon a time with my sister Rev. Alicia Rapking, who is a director of a ministry to economically disadvantaged folks in WV, I discovered just how little I actually knew about Aging and Older Adult Poverty and even more how little many churches know about it, because some of the poverty that exists is hidden. This is true of Older Adult poverty as well, it is often hidden. One of the homes I looked at in my first house hunt in 2009 was a house that was foreclosed upon by Medical Corporation. I was told this by neighbors, who indicated that the couple in their late 80's had been forced to sign over their home, by the Hospital after they got behind on their medical bills. They had initially moved into their RV next door on a neighbor's lot until they were forced to sell it and they finally were able to persuade a daughter to allow them to move in with her.

At the time, this tale struck me as a little far-fetched because I did not want to believe that a person, who could afford a recreational vehicle, could not afford to pay their bills or become foreclosed upon. I had bought into the stereotypes of aging and poverty. Indeed, there are a lot of myths about Old Age poverty. One that seems prevalent is that many seniors have fat retirements. Some do and some don't. Some seniors would love to retire but cannot afford to. The working poor, for instance who work low wage and temporary jobs without benefits, never have a retirement and often try to work long after their peers have retired. Finding suitable employment in old age, become increasingly difficult because of Ageism and because of declining physical ability. A second myth is that Medicare takes care of medical costs and social security can take care of the other basic needs. The average social security check is about 1200 a month, which in many places barely covers monthly housing costs, and works out to about 15k a year. No wonder 1 in 10 adults over the age of 65 is still working at least part-time.

Many of our Older Adults were brought up in an area in which they were taught that hard work was rewarded, that loyalty was paramount, and that elders should be cared for by their families. Today's world has changed. Many times, folks do not take care of their own. I witnessed as a pastor many an adult child bleed their parents dry financially. I received loans and gifts from my folks several times as an adult but was fortunately never asked to do the same for them, despite their medical issues and bills. Some Older Adults came of age in a world where the wife was made to stay home and take care of the children, so never earned social security or a pension of her own, once she married. Some of the residents of the retirement community I served as chaplain told me of the rules in force for teachers in Westmoreland County, PA when they taught that specified that teachers had to be single to be employed there and that married teachers automatically were not renewed the school year after matrimony. Loyalty, to a cause or firm seems to not go unpunished in the modern world of mergers, acquisitions, and layoffs. Older Workers have a harder time finding re-employment and many are unprepared for job searching, having expected to work until retirement for the same firm. I had many a parishioner in NC who went to work in textiles after school, only to have their firm move operations overseas, 30 years into their working lives. One of them still haunts me, who had a degree in textile engineering from a major university, who was doing temporary floor manufacturing work in his early 60's after 3 successive employers moved to the Far East.

Churches typically do not understand their role in taking care of members of their community who are impoverished. One of the churches I served, directed their pastor, to not ever provide any assistance to any of those who showed up to beg for help. They had been simply overwhelmed by requests after a prior pastor had paid twenty dollars to a person's drugstore bill for medicine. The pastor had been authorized to help through a church fund as long as he did not give cash directly. Another church, not an urban church but a suburban church, requested a homeless man leave worship one Sunday until he took a bath, because he was offending a local celebrity member of the congregation with his smell. Both of these examples involved Older Adults and cried out for different outcomes, which they probably would have, had the churches involved had a better understanding and commitment of Aging in Poverty.

Since the Office on Aging and Older Adult Ministry at the GBOD for the United Methodist Church (https://www.facebook.com/Godlovesolderpeople), has a focus on good aging, we understand the need for helping the church see the invisible: Aging Poverty. We would like to make poverty more visible in Older Adults because we know that good aging takes focus and poverty takes a person away from this focus. As in the earlier example it also results in people taking desperate measures, they would not normally take. Our office also works to prepare, equip, and empower local churches to minister to disciples as they age. Therefore, it is important for us to equip churches and leaders to see the invisibility of Elder poverty, to be prepared to take action to address it in the Older Adult population.

There is another reason I am and we are interested in Older Adult poverty. Jesus tied poverty in things to poverty in spirit many times. For instance, on the Sermon on the Mount, he said "Blessed are the Poor in Spirit, (Matthew 5:3 NIV) for theirs is the Kingdom of Heaven." Jesus was not talking about just those who are impoverished financially but the rest of us who are impoverished in spirit and have joined ourselves to others who to work for a better life for all spiritually. For theirs is the Kingdom of Heaven, reminds us that the reward for working to take care of those in elder poverty is a treasure laid up in heaven.

This is the reason why, the Office on Aging and Older Adult Ministry, through its Committee on Older Adult Ministry, is offering churches an incentive to work in the area of Aging Poverty. We are offering seed money for those churches who would like to make Older Age Poverty more visible and to address it. Information can be found at the websites below.