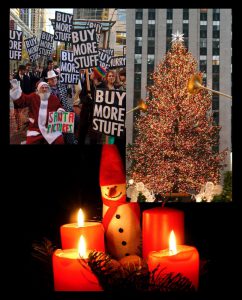 Look carefully at the images to the right. All of them are real things. None of them is intended to be ironic in the least. Each of them in its own way is a sign of celebrating a season-- a season I'm coming to call "Admastime."

Admastime represents the collision of two Christian seasons-- Advent and Christmas-- plus two other seasons that have little to do with Christianity per se-- the retail shopping season and winter (if you're in the Northern Hemisphere, that is!).

The result of this four-track train wreck is that two critical elements of Christian theology can tend to get wiped out, first by the collision itself, and then by the overwhelming preponderance of noises, voices, songs, images and inducements to have fun with friends and family and buy things that are more plentiful than attack ads during the final weeks of election campaign seasons.

Those two missing elements are "vent" and "Christ."

Vent-- from the Latin, venio, venire, to come. Advent historically referred to the 'coming toward' of Christ, a season where we first and foremost reflect on the second coming of Christ as judge of the living and the dead to bring about the consummation of God's reign on earth as it is in heaven. This Advent, the second coming of Christ, is the final manifestion of God's "good news to the poor, deliverance of captives, recovering of sight to the blind." Such good news and different outcomes are discontinuous with our world as we know it because the powers in play in our world are bent on continuing to generate their opposites-- delivering more bad news to the poor, creating more and more captives and addicts, and keeping everyone blind to the fact that this is exactly what's going on. This world keeps singing "Sleep," "Rest," "Relax," and in more recent years "Buy More Stuff!" while the texts we read for Advent keep saying "Wake up!," "Be on the watch, day and night!, "There's work to be done!" and "Get ready to leave all your stuff and flee for the hills!" Where is there any sign or even willingness to hear of The Day of the Lord in Admastime?

The other missing element is Christ. Now, to be sure, there is much talk of "baby Jesus" even in the cultural renderings of this season. But he is variously labeled "cute" or "sweet" or, most commonly, "asleep on the hay." We may hear something of his poverty-- but it is thoroughly sentimentalized poverty. We may even hear something about him being Emmanuel ("God with us")-- but that is quickly reinterpreted as God being in all of us or God loving all of us just like a parent loves a newborn child, or worse, as the love of Santa who gives gifts to all "good" little girls and boys. So, as a friend of mine wrote recently, about the best that Admastime gives us is "baby Jesus eternally chained to a manger."

But Christ-- Messiah, Deliverer, Anointed One, Savior, Incarnate Lord-- where do we ever hear of him? Maybe we may substitute the reading from the prologue of John's gospel intended for Christmas morning on Christmas Eve and so hear something of the glory of the only-begotten Son of God. But aren't we more likely on that night to stick with the script that gives us the birth rather than John's theological commentary on it? If so, how much time in Admastime do we really give to ponder the mystery of Jesus Christ, and not simply coo and ahh about the babe in the manger?

I'm not asking that question of the surrounding culture which is more to be pitied and prayed for than scorned.

I'm asking it of us... readers of this blog who are likely to be heavily invested in leading, planning and preparing for worship in United Methodist congregations.

We are now, all of us, in the thick of Admastime, constantly, 24/7, at least through December 26 when Admastime offers its final hurrah in a blaze of post-Christmas clearance sales.

How are you planning for worship that celebrates and prepares people to expect the second coming of Christ in these weeks before Christmas?

And then how are you preparing to celebrate, reflect on, ponder, and help your worshiping communities be changed by the revelation of God incarnate in Jesus Christ, beginning Christmas Eve, and in some concentrated way on the 12 days that follow until the celebration of Epiphany (January 6)?

The people in this culture and in your worshiping community are living, swimming in and constantly breathing Admastime. It is toxic to our professed faith in Jesus Christ. And it keeps us and our neighbors in thrall to the powers of this world.

How will you help them experience Advent and Christmas in ways that speak and enact good news, deliverance, and new sight in the blinding darkness that now surrounds us all?