Here's another take at the Four Core Competencies of Discipling Groups, this time with an acronym rather than descriptive tags.

I'm not particularly a fan of acronyms, though I use them actually a good deal in my work at GBOD-- SLICE for worship that is Sacramental, Liturgical, Indigenous, Connected and Embodied, and then the five acronyms that make up the measurable traits of the Four (Plus 1) Core Competencies of Congregations-- PEARL, CLASP, POET, FACT, and LINK.

ACME, though, as an acronym, gives me a bit of pause. I grew up watching and loving cartoons, especially the cartoons directed by Chuck Jones, and none more than his Road Runner series. (Sorry, but the later DePatie-Freleng duo, clever as they were with their minimalist Pink Panther, had nothing on good old Chuck!).

So when I see or hear the word ACME, only one thing comes to mind: the ACME company, to whose catalog of bizarre devices that never seemed to work as advertized Wile E. Coyote was hopelessly addicted.

What somewhat redeems ACME for me is the actual meaning of the word-- which is something like "best of the best," or "summit of achievement." That, and the only other word that one can make in English out of the same four letters is MACE. Somehow that seemed a bit too menacing, unless one were thinking of the astringent spice itself, which is quite tasty in appropriate quantities, and not the spiky medieval weapon nor the pepper-spray alternative.

"Accountability" has become a scary word, more associated with judgmentalism and punishment in more recent years. But it's really a good word, even an essential word, if we're talking about "watching over one another in love." Accountability means giving an account, bearing witness, telling the story of how God is moving in your life and how you are cooperating with God's sanctifying grace.

The General Rules are such a rule of life grounded precisely in the baptismal covenant, a list of actions to do (and avoid!) and means of grace by which we can put our vows into practice. The General Rule of Discipleship, which underlies the Covenant Discipleship process, is a contemporary summary of the principles underlying these practices that can guide your accountable discipleship group to form its own covenant.

Size matters in these groups. The "sweet spot" in our experience observing such groups across the connection is somewhere around 5, and no more than 7. This is just the right size so that everyone can listen carefully to everyone else and build the kind of trust needed both to support and to challenge each other to keep growing.

ACME discipling groups aren't "lone rangers." They never get confused and think they are the only form of Christian community someone needs. So they're connected to congregations, on purpose, by a covenant between congregations and the groups that specify what each partner can expect of the other, including what benchmarks each should expect the other to be reaching in a given period of time for the covenant to continue. Yes, more accountability!

A good number of these groups, especially in the larger missional church movements, have discovered the value of being connected to each other as well, either within a city, or a region, or even more broadly.

And to do their work well, they're constantly seeking to be "connecting groups" as well.
They train their participants to be on the lookout for "bright eyes"-- folks who show an interest in growing in discipleship themselves-- and then connecting these people either to their own group (if there's still room) or to another one that can help them take their next steps.

And since these groups are serious about helping people live out their discipleship in their communities, and not just as individuals, they are also constantly working at connecting their participants to the work of other organizations in the community that may already be doing great "kingdom work, but could use another hand or two to do it even better.

ACME discipling groups are missional at their core. Missional comes from the Latin noun "missio" which is related to the Latin verb, "mittere" to send. Their point is precisely both to equip and then to send people as missionaries into God's mission fields all around us, already "white unto harvest" as Jesus put it. So the overall direction of the group is primarily outward. Group members support each other precisely so that they can go out into the world and, as we say in our baptismal covenant, "serve as Christ's representatives in the world," wherever in the world we find ourselves.

That means two things about these groups. They are not the whole of "discipleship" in itself, though they certainly also are a means by which we are discipled. We don't become disciples solely by attending these groups, though they do help us profoundly to be disciples. We become disciples primarily by following Jesus every hour of every day, and these groups help us to do that, both while we are with each other, discipling each other, and especially while we are "in the world." So instead of being the fullness of discipleship, these groups are more like "launching pads" or "catalysts" or even "training grounds" for faithful discipleship, including both faithful service and ongoing growth in holiness of heart and life.

And that means, too, that the work of these groups is never solely outward, though their aim is outward. These groups also supply some of the inner formation necessary to go out faithfully in the first place. They constantly teach the theology and practices of God's saving grace (prevening, justifying and sanctifying) as they watch over their members and challenge and encourage each other to open themselves to this grace more and more by using all the means of grace (works of mercy and piety).

Alan Roxburgh warns that too many church-based small groups in our culture are experiential in a bad way. And he's quite blunt about the results:

The current use of small groups in churches serves to deepen the captivity of the church to expressive individualism and trivializes the biblical narrative by reducing it to a means of engaging personal experience and feelings. (Roxburgh, Alan (2009-12-30). Missional Map-Making: Skills for Leading in Times of Transition (p. 146). John Wiley and Sons. Kindle Edition.)

But there is such a thing as small groups being experiential in a profoundly good way, if, that is, they focus on the objective and visible experience of the outworking of God's complete salvation in people's lives (entire sanctification) and of God's kingdom at work in the world.

We often do not think about salvation, much less something as "personal" as entire sanctification or Christian perfection, as an objective experience. But John Wesley did. In his sermon "The Scripture Way of Salvation," Wesley preached:

But what is perfection? The word has various senses: here it means perfect love. It is love excluding sin; love filling the heart, taking up the whole capacity of the soul. It is love "rejoicing evermore, praying without ceasing, in everything giving thanks."

There are clear, objective marks of this love and its progress in the lives of others. Even when love begins to fill the heart, even when people begin to grow in joy or pray more frequently, the signs of this are generally evident to any who encounter them, and more especially those who watch over them in love. It is precisely to spur one another on to such love and good works that discipling groups gather.

Likewise, the signs of God's kingdom at work in the world, beyond our own lives, are obvious to all with eyes to see. The blind or blinded get their sight back. Those dead or left for dead are raised. The sick are visited and healed. The prisoners are visited, and some are even set free. The hungry are fed. The naked are clothed. The poor hear good news proclaimed to them.

Members of ACME discipling groups bear witness to each other of God's objective salvation in their own lives, and in the life of the world.

So, there you have it. ACME discipling groups. 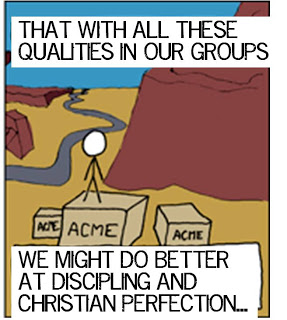