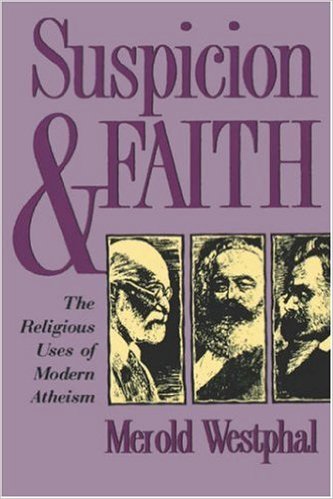 Have you already decided on your Lenten practice? Even if you have, I have a challenging Lenten practice that you might not have considered. I would not have considered it myself, had I not read it in Merold Westphal’s Suspicion & Faith.1His suggestion is that we take a “serious and sustained reading of Marx, Nietzsche, and Freud as a Lenten penance.”2Sounds odd, if not absurd, doesn’t it?

As Westphal reminds us, our Lenten practices are a means (acts of penance) to the end of sorrow for our sin (penitence) and thus a change in life (repentance). Is it possible that the fathers of modern atheism could deepen our Lenten practices? Like Westphal, I believe so. Westphal first points out we should resist our tendency to “refute or discredit [them]…[because] their critique is all too true all too much of the time.”3 Marx, Nietzsche, and Freud have much to teach us about our tendencies toward idolatry and how we can use religion in ways that serve to further our self-interest.

Certainly, one Lenten practice I’d recommend is reading Westphal’s book. But beyond that, I suggest putting into practice what Westphal recommends. A helpful practice I gained from his book is being suspicious, not just of my beliefs and practices, but also of my suspicions themselves. It is helpful to question my motivations for such practices as engaging in daily devotions. Is it really so I can connect with God? Or is it so I can feel good about myself or so that others will notice my level of piety?

The deeper level that Westphal points us toward is being suspicious of our suspicions. Similarly, philosopher Francis Bacon cautioned, “For what a [person] had rather were true he more readily believes.”4 So the next time a particular political party or religious group (insert those who push your buttons) speaks, notice your suspicions about their beliefs and motivations. Then ask, “What if my suspicions about their beliefs and motivations are guided by a deeper concern? What if what they are saying is true? How do I have to rethink my positions and even my identity?”

So instead of giving up Coke or Facebook or chocolate, why not consider being suspicious of our suspicions for Lent? How might that lead us toward a deeper repentance and more intimate trust in God? It could lead us toward more Courageous Conversations. I warned this would be challenging. Perhaps, though, you are too suspicious of my motivations to take the challenge.

How might you be in intentional conversations with those with whom you disagree?

How might such conversations lead toward deeper humility and trust in God?

How do you create and foster intentional settings that provide for challenging and nurturing Christian conversations?

Engaging Your Community through Lent

The season of Lent leading up to Easter is a season of preparation, readying ourselves for the celebration of Resurrection. It is also a time to . . .

The Easter Sunday broadcast of Jesus Christ Superstar Live with John Legend has more implications than what you may think. What NBC might not rea. . .

Your Opportunity at Easter We will celebrate Resurrection Sunday in just a few weeks, and that means you need to be preparing now to expand your . . .